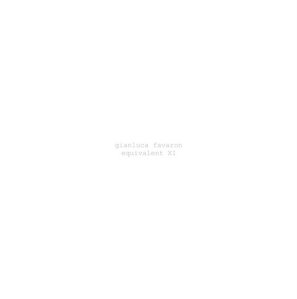 following the publication of the extremely limited single-sided 12″ record “surfaces”, which occurred just a few months ago and is now hopelessly sold-out, gianluca favaron returns on 13 with a new solo work released in the prestigious “private sounds” series.
besides having published a few solo works, favaron is part of under the snow along ith stefano gentile and collaborates with ennio mazzon on the zbeen project. in the past he has released music as ab’she and was part of lasik surgery along with pierpaolo zoppo. among his most recent releases we remember his collaboration with corrado altieri entitled “the system of objects”. “equivalent XI” continues the path undertaken with “surfaces”, also benefiting from some excerpts that were already included in the aforementioned work, which are proposed again on this new CD.
starting from simple recordings of sounds produced by everyday objects (…such as paper, scissors, kitchen stuff etc.), treated mainly with two delay machines, favaron has collected eleven compositions. the idea behind this new release is to create some patterns based on the repetition of small sound particles obtained from a single source.
in the eleven tracks on the album, mostly of short duration, we witness the proliferation of particular sound events that, sometimes wandering alone or sometimes by congregating into small throbbing and vital lumps, generate a vibrant microcosm characterized by short loops, slowly but constantly evolving. In some cases, as for example in the more long-lasting closing number, the simplicity of the construct and the infinitesimal tonal progressions are appreciated for their intrinsic hypnotic quality.
mastered by giuseppe ielasi, “equivalent XI” is released in a limited edition of 250 copies that stands out for its essential graphics; the first 50 copies of the cd contain a real hand-numbered photograph.
*****
gianluca favaron “equivalent XI”
buy here