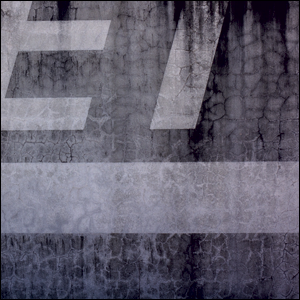 Cristiano Deison and Gianluca Favaron met in 2011 when the latter was a guest on Deison’s “Night Sessions” album on Silentes. Both involved in many projects and music collaborations – Favaron with Lasik Surgery, Maribor, Zbeen and Under The Snow, and Deison with Mingle, Matteo Uggeri and Maurizio Bianchi – during the summer of 2015, at last free from previous engagements, they finally decide to mix their sound attitudes and give life to “Nearly Invisible”, an album where they process concrete sounds, field-recordings, digital impulses and analog tapes. A sort of “rational improvisation” where the two artists have a conversation talking through the sounds of their surrounding realities. A slow overlapping of contaminated drones, embedded with manipulated noises describes “nearly invisible” environments visually captured by the companion pictures taken by Stefano Gentile. Rough images, textured, dirty; details that open windows onto landscapes where you can recognize panoramas, shadows and structures. All of this is presented in a high quality package, also available as a limited “art edition”.

DEISON
Deison is involved in the experimental electronic area since more than 20 years (he played in Meathead during ’90s) and he approached the world of sounds doing his own tape collages with tape recorders, turntables and objects mainly in the field of experimental noise; he runs a small label (Loud!) and collaborates with artist like Lasse Marhaug, KK Null, Teho Teardo, Thurston Moore, Scanner, etc… Influenced by the experimental music, ambient minimal electronic as well as a great interest into digital music and sound design, he operates with loops, field-recordings and drones to develop swirling electronic sounds of enormous range and complex musicality. Waves of looping deep ambient scapes, penetrated with sample fragments and light additional noise-ambient textures form Deison’s silent, minimal frame-set. His records have been released on various labels in Japan, Usa, UK, Italy and Germany. Latest collaborations include works with Maurizio Bianchi, Uggeri and Mingle.

Gianluca FAVARON
An electroacoustic musician, his work focuses on the processing of concrete sounds using software made on purpose. Field-recordings, drones: an approach that uses different music languages, to elaborate, merge or transform the sounds made by everyday objects into something different, both taking them out of context and/or processing and modifying them with various effects. He currently collaborates with Corrado Altieri in the “Altieri | Favaron” project and with Stefano Gentile (Silentes) as “Under the Snow”. In 2015 he has released the CD albums “Entretien” on 13/Silentes and “Forget About Any Non-Gray” on MFU /Concrete; the Ab’SHE / Uncodified (Corrado Altieri) split album “Applied Misinformation for People Control” was also released by Naked Lunch Records.